Known for a solid defense in the league, ASVEL will be hosing one of the table toppers CSKA Moscow at their home arena. Till now they have managed to win 3 matches out of the total matches they have played in the euro league. In order to give a tough fight to the CSKA Moscow, ASVEL will need to activate it’s scoring and rebounding touch to avoid the Moscow team to take advantage. At the same time, ASVEL Villeurbanne will need to keep its perfect home record intact when it faces the reigning EuroLeague champion today. Livio Jean Charles (Small Forward) & Edwin Jackson (Shooting Guard) will have a crucial role to play as they take the team’s responsibility.

CSKA Moscow continues to be a team in transition, especially after losing their lost Valuable Player Will Clyburn for the season. So far, newcomers like Mike James and Darrun Hilliard have stamped their names on the offense and Kyle Hines and Nikita KUrbanov have kept the defence running. Till now the side has played six games, winning 5 out of them which clearly shows their dominance and intent for the ongoing season.  Darrun Hilliard (Shooting Guard) & Mike James (Point Guard) will be the key players for the side.

The match between ASVEL Villeurbanne vs CSKA Moscow will be played at Astroballe Arena, France.  The arena with a capacity of 5,500 spectators.

The match between ASVEL Villeurbanne vs CSKA Moscow will start at  1:15 AM IST on November 9, 2019.

The match between ASVEL Villeurbanne vs CSKA Moscow will be telecasted on Sony Ten 1. The live stream will be available on the Sony Liv app. Scores are also available on euroleague.net official website.

LDLC ASVEL Villeurbanne: The hosts will be missing the services of their Point Guard player Antoine Diot as he sustained an injury in the last game. Otherwise, the team has no updates of suspension and injuries.

CSKA Moscow: Team will miss the services of Will Clyburn who as he sustained torn ACL and is set to miss the upcoming games. No other news of any injury or suspension from the side. 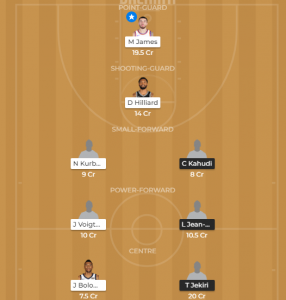