Pakistan U19 will be squaring off against Scotland U19 in the 6th match of ICC U19 World Cup. Pakistan side has performed well in the warm-up matches and has vast experience in comparison to Scotland side. Pakistan initially defeated Nigeria and then thumped Sri Lanka to remain unbeaten in the warm-up games. While Scotland had mixed warm-up matches were they won comprehensively against Japan and then lost comprehensively against West Indies.

The 6th match of ICC U19 World Cup between Pakistan U19 and Scotland U19 is scheduled to take place on 19th January at North-West University No 1 Ground, Potchefstroom. The match will commence from 1:30 PM (IST) onwards with live telecast and live streaming on Star Sports 1 and  Hotstar respectively. The live score can be viewed on official websites.

Haider Ali is a technically correct batsman who has the ability to play hitting game as well. Ali smashed 70 runs off just 38 balls against Nigeria and played a decent knock of 33 against Sri Lanka. The 19-year-old hasn’t played too many games till now but has looked comfortable in all the appearances.

Rohail Nazir, the skipper of the side, is one of the most dependable batsmen of the side. Nazir was not in good touch in warm-up matches but is expected to deliver in the games that actually count. The wicket-keeper batsman has struck 471 runs in 11 List A matches at an average of 47.10.

Tomas Mackintosh smashed a brilliant century against Japan in the warm-up game. The 16-year-old is a decent player who has the ability to dig deep. Mackintosh has scored 370 runs in 12 matches at an average of 41.11. 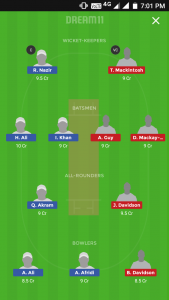