IPL 2019 Tickets Pricing, Availability & Online Booking
Skip to content
IPL 2019 Tickets: IPL 2019 is on the horizon looking to light up cricket stadiums amid election fever. It will be the first time despite general elections IPL will be hosted in India tempting fans to gush over. Amid all tension from across the border, IPL will cool the tension creating moments of joy during the ongoing turbulent time. 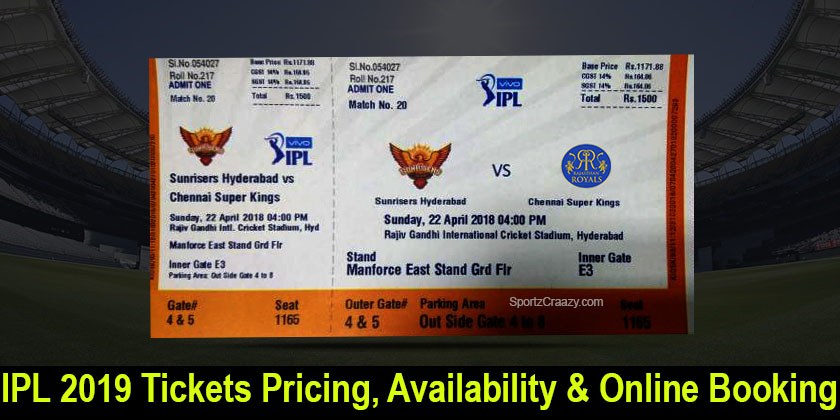 The tournament will begin from March 23 and will be played across 9 stadiums in the country. Every franchise has its own home ground to host IPL matches, the list is as follows:-

Also Check: VIVO IPL 2019 | The Most Celebrated T20 League in the World

The IPL 2019 tickets will begin from for all venues declared on the IPL official website. The fans have the perk to buy the IPL ticket either by visiting the stadium ticket counter or through various online mediums.

Every team play 7 home games, almost every cricket stadium offers 35,000 seats to the fans. Assuming 50% of the IPL 2019 tickets are sold online, while rests are sold through ticket counters.

The IPL 2019 Tickets will be available on Book My Show, Paytm, Insider.in and Eventsnow. The ticket price range varies based on the respective section of the stadium layout.

Although every stadium has priced its ticket differently, but in general ticket price of the IPL tournament ranges between 400 – 40,000 INR.