CSK vs KXIP Dream11 Prediction: Chennai Super Kings will play against Kings XI Punjab in the 53rd match of IPL 2020 on Monday. Both teams will be playing their last game of the season. While CSK are already out of the race for the playoffs, it will be a must-win game for Kings XI Punjab. A win in the next game can keep their playoffs hopes alive in the tournament.

Chennai Super Kings have registered two morale-boosting wins in their last two games against Royal Challengers Bangalore and Kolkata Knight Riders. The wins will certainly do a world of good to them and they would want to finish the tournament with another victory on Monday. Chennai Super Kings are currently rooted at the bottom of the table with 5 wins in 13 matches.

Having not been given too many chances in the start, Ruturaj Gaikwad is making full use of all the opportunities he has been getting in the fag end of the tournament. He played another sensational knock of 72 runs in the last game and was also adjudged Man of the Match for his stellar innings.

He would be keen to end the tournament with another such knock against Punjab. If there is any other player which you must take in your Dream11 team, then it has to be Ravindra Jadeja. The southpaw has been in sensational form with the bat. He has been successful in giving late flourish to the side. He could give you points in all three departments. Sam Curran too has a similar case. The all-rounder has been exceptional with both bat and ball and would be a crucial player ahead of the match against KXIP.

CSK vs KXIP Dream11 Prediction: The batting has done exceeding well in the last five games. The inclusion of Chris Gayle has made Punjab a formidable unit. They have performed exceptionally well since the arrival of Chris Gayle in the side. Unfortunately, Punjab lost in their last game, but with only one match left to play, expect them to come all guns blazing against Dhoni and Co.

We would suggest you to choose as many batsmen from Punjab as possible. Chris Gayle and KL Rahul are wreaking havoc at the moment, while Nicholas Pooran, too, has been playing great cameos

As far as the bowling department is concerned, Ravi Bishnoi and Mohammed Shami would be two great picks to have in your today fantasy team. 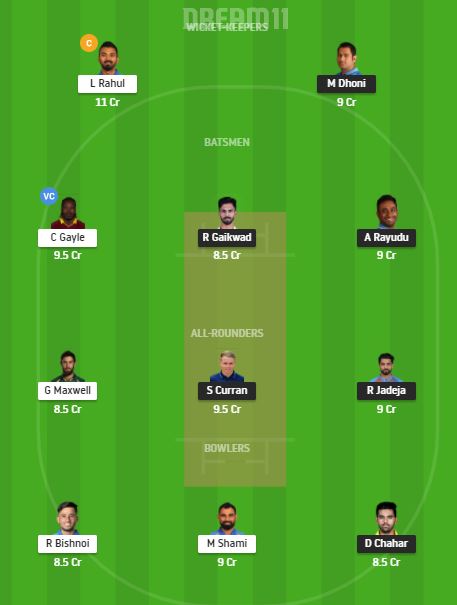