The Real Kabaddi League season 2 is halfway through and the points table is experiencing a lot of turmoil as the Finale is closing in. Every team in the RKL is trying their level best to book their spots in the top 4.

The RKL’s concept of combining entertainment and sports has worked really well as we have been able to witness some mouth watering matches as well as performances from various celebrities. Match day 7 of the RKL will take place today but before that let’s find out the results from game day 6.

The first contest featured the Jaipur Jaguars and the Chambal Pirates. The Jaguars were handed with their first defeat of the season by the Pirates who are now on a two match winning streak. The match ended with a score line of 35-40 and Chambal Pirates’ raider Ajay Kumar became the Man of the Match for picking up a total of 8 raid points.

The reigning champions Shekhawati Kings defeated Mewar Monks in the second game by a slim margin of 2 points. The Monks came very close to winning this game, but the Kings ultimately prevailed as the game finished with a score line of 42-44. Shekhawati Raider Lakshya Malik won his second consecutive man of the match award last night after he collected a total of 17 raid points.

The following match saw Jodhana Warriors beat Aravali Eagles by 37-34. Just like most of the matches in the RKL 2022, this match was also closely contested. The Eagles will be under huge pressure as this was their 3rd defeat in a row. Jodhana Raider Dinesh received the man of the match award as his 19 raid points ensured the victory for the Warriors.

Singh Soorma eased past Bikana Riders by 43-34 in the last game of Match day 6 of the RKL season 2. The Soormas made an impressive comeback after losing their previous game against the Jaipur Jaguars. The Riders will be disappointed to lose the game by a margin of 9 points despite having an extremely rigid defense. Raider Hitesh from Singh Soorma was felicitated with the man of the match award for winning a total of 14 raid points. 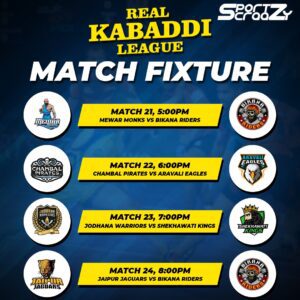 Match day 7 of the Real Kabaddi League season 2 contains 4 high-voltage matches. The first match will start from 5 PM as the Mewar Monks will go against Bikana Riders. Both the teams endured a defeat in their last match and they will look to get back to winning ways.

Chambal Pirates will look forward to keep their momentum high as they will be hoping to register their second win on the trot. The Pirates will square off against Aravali Eagles – who are coming from three straight losses and will be desperate to win this match to keep their hopes alive to make it in the top 4.

The third match of the evening will feature Jodhana Warriors and Shekhawati Kings from 7:00 PM onwards. Both the teams had a poor start to the season but they were able to pick up the pace when it was necessary. Both sides have also remained undefeated in their last two fixtures and this one promises to go down the wire.

Table toppers Jaipur Jaguars will be aiming to resume their dominance after losing their last match against Chambal Pirates by just 5 points. They will face Bikana Riders from 8:00 PM onwards.

Also Read :- Everything related to Real Kabaddi league season 2 you want to know as ardent Kabaddi fan in detail 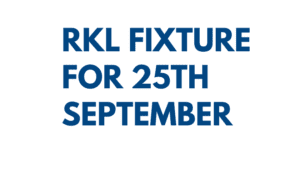 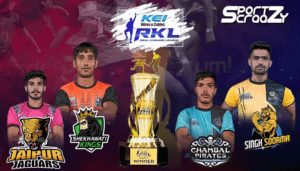 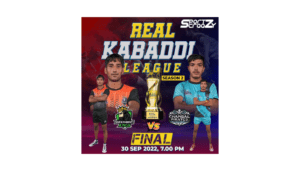 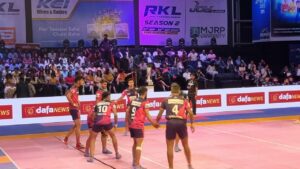