British teenage sensation Emma Raducanu who is only 18 years old created history after winning US Open and becomes the second-youngest player in the history of Tennis to win the Grand Slam singles title after Maria Sharapova who won Wimbledon in 2004. 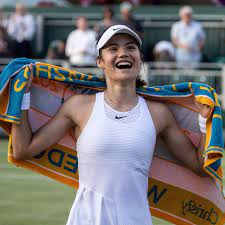 It is evident that the success in her life at such a young age came due to blood, sweat, and determination, also it will empower women tennis in British where a women player from the UK hasn’t won any singles title till 44 years and that jinx was broken by Raducanu herself.


Taking about the final where she faced Leyliah Fernandez of Canada and held her nerve to win the marquee event.

She is a multi-talented athlete as she took up a tennis racquet at the age of 5 and simultaneously trying her hands in all other games including the likes of Horse riding, Table tennis, Go –Kart and tap-dancing.

Many of you would be surprised to know about her connection with India as the tennis sensation was in India in 2018 and 2019 respectively where she played ITF tournaments in the junior circuit and romping up to fans.

From being World Number 150 in the last few years to reaching at Number 23rd spot in US Open 2021 is farfetched progress and she did it in less than as compared to her rest of the counterparts.

When she took part in ITF Chandigarh Lawn Tennis where she won a trophy against Ukraine’s 6-4,6-4 to win the title and she also did well in the ITF event held in Delhi in 2018 itself.

According to media outlets, Raducanu likes India and she has a special place in her heart for Indian dishes and the ITF event she took part in Pune where she won trophies at a whopping amount of $25,000.