KKR vs MI Match Summary: A high scoring affair was once again witnessed at Eden Garden with as many as four players scoring half-centuries on Sunday.

After 6 straight losses, Kolkata Knight Riders have finally registered a win, as they beat Mumbai Indians at home by 34 runs, thereby earning their sixth win in the tournament.

Batting first, KKR posted a daunting 232- run total on the board against MI’s powerful bowling line up.


KKR openers namely Shubhman Gill and Chris Lynn went hammer and tongs right from the start of the innings. The duo made full use of the power play overs, having striked as many as 50 runs in the first six overs.

Interestingly, both the batsmen started striking even more mercilessly post the first six overs. Shubhman Gill (76 off 45) notched up his highest score in the tournament, while Lynn also blazed his way up for a fine 29-ball 54 run innings.

DRE RUSS is adjudged the Man of the Match for his brilliant 80* and bowling figures of 2/25 ?? pic.twitter.com/rY5uWxvWDa

The first wicket fell in the 10th over in the form of Chris Lynn, however, what lay ahead of Mumbai was an even bigger misery as Andre Russell was sent in early at number three position on Sunday.

Russell unleashed another hell of an innings, hammering MI bowlers to all parts. The West Indies all-rounder tonked 8 sixes and hit 6 fours in his 40-ball 80 run innings.

Mumbai Indians, in pursuit of a mammoth total, had the worst of the starts in a run chase, with both their openers namely De Kock and Rohit Sharma into the pavilion inside four overs.

Evin Lewis and Suryakumar Yadav too didn’t stay any longer as Mumbai were 4-down at 58 in 8 overs.

But then, in comes in-form Hardik Pandya and suddenly the Eden Gardens crowd was once again on its feet.

Pandya didn’t spare any bowlers, hitting almost every bowl out of the park. Staying way inside the crease, the all-rounder hammered the ball to every part of the ground and kept Mumbai’s hopes alive till 18th over of the innings before he fell for a short bowl off Harry Gurney only to see Mumbai lose the match in the end. 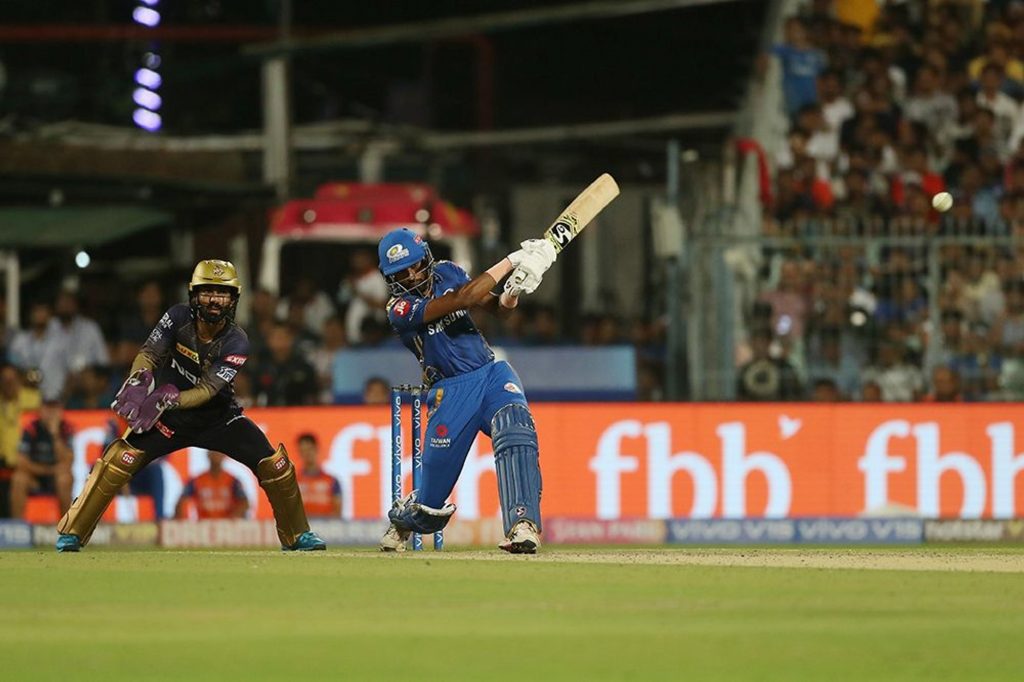 Hardik played a sensational 91 run knock off just 34 deliveries, including nine sixes and six fours. However, once the all-rounder got out, it was all over for Mumbai Indians, but what an innings from Hardik. Take a bow!