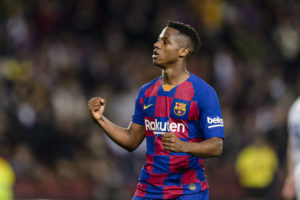 Barcelona has reached the milestone of 9000 goals in all official competitions following their 4-1 rout over Villarreal in La Liga on Sunday.

Barca achieved the feat, thanks to teenage sensation Ansu Fati, who came off the bench and scored the team’s fourth goal. Pau Torres, Luis Suarez, and Antoine Griezmann were the other three goal scorers for Barca.

Barcelona is one of the oldest football clubs which netted its first official goal on 5th April 1909.

Just over 111 years later, Barca scored their 9000 official goals under the leadership of Football Giant Lionel Messi who contributed 630 goals in the tally.

He is followed by Cesar with 232 goals and Kubala and Luis Suarez with 194 goals each to their credit.

That strike by @ANSUFATI was the 9️⃣,0️⃣0️⃣0️⃣th goal in Barça history!

Barcelona will now take on Espanyol on Thursday, July 9th. Barcelona sits in the second spot in the La Liga standings, four points behind lead-runner Real Madrid with four Games to Play.

There will be a huge expectations on their star players like Lionel Messi, Luis Suarez, Ansu Fati, and Antoine Griezmann to put up a strong show abead and finish at the top of the league standings.