3 Reasons Jaipur Pink Panthers Can Win: Pro Kabaddi season 7 has started and there have been a number of intriguing matches, performances and action, which has set the right tone for the days to come.
Jaipur Pink Panthers won the inaugural season with ease, hinting what to expect in the upcoming years, but failed to qualify for the play-offs in four of the next five seasons. The last time they reached the playoffs was in Pro Kabaddi Season 4, when they ended up as the runner up, losing to Patna Pirates. 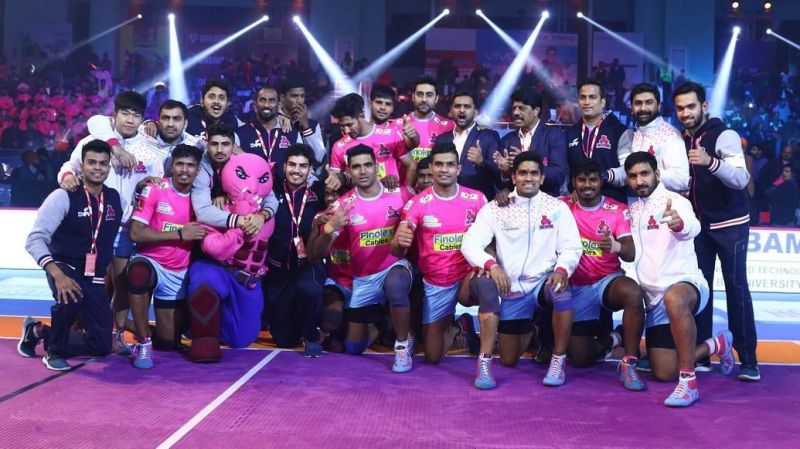 The Jaipur Pink Panthers have had a wonderful start to their campaign, winning two matches in as many played, and are going strong. They beat U Mumba convincingly, and then came from behind to trounce Bengal Warriors, showing the spirit they possess.
Calling them minnows or writing them off will be wrong as they were always strong contenders, who somehow underperformed.

Let’s take a look at the 3 reasons why Jaipur Pink Panthers can win the Pro Kabaddi 2019 title:

(1) Formidable Raiding Attack Led by Deepak Niwas Hooda
Jaipur Pink Panthers have come with probably one of the best raiding attack, if not the best in Pro Kabaddi Season 7. With the likes of Deepak Niwas Hooda, Nilesh Salunke, Ajinkya Pawar and Deepak Narwal coming at you, beating Jaipur Pink Panthers home or away is going to be a hard nut to crack, as we have already seen
Deepak Hooda has scored a total of 710 raid points in his career in the last 6 seasons, including 24 super 10’s and 18 super raids, at a phenomenal average of 6.89 raid points per match.
The storm Deepak Niwas Hooda needs the calm, which shall come from the likes of Nilesh Salunke and namesake Deepak Narwal. Maharashtrian Ajinkya Pawar, the discovery of Pro Kabaddi Season 6 will be a perfect backup for the side, rich in options. In the last season he scored 71 raid points in 17 matches at an average of 4.18 raids per match.

(2) Unsung Heroes in the Defensive Line-Up
Amit Hooda was the star performer for Jaipur Pink Panthers in Pro Kabaddi Season 4, but for some unknown reason Jaipur didn’t retain him and that cost them badly. Although it took 2 years for Jaipur Pink Panthers to learn from their mistake, but Amit Hooda is back in his prey to hunt down the opposition. As they say, it’s better late than never, and that’s the case with Jaipur getting him back. Jaipur splashed the cash, and secured the services of Amit Hooda for Rs. 53 Lakhs.
The ankle-hold specialist Amit Hooda along with the left cover defender Sandeep Kumar Dhull is among the most formidable corner-pairs in the league. Sandeep Dhull scored 67 tackle points in 22 matches at an average of 3.05 tackles per match last season, and looks more frightening this season.

(3) Robust Bench Strength
The Jaipur Pink Panthers have signed a total of 18 players for Pro Kabaddi Season 7. The team has a plethora of options for every position. The raiding options include Deepak Hooda, Nilesh Salunke and Ajinkya Pawar, any of whom, on their day, can single-handedly win the match for their side.
They have one of the best all-rounders in Nitin Rawal, who is equally adept at raiding and tackling and could their x-factor player.
Even if these raiders fail, they have the likes of Guman Singh, Lokesh Kaushik and Milinda Chaturanga as backup.
The other youngsters who can make a difference this season are Pawan TR, Elavarasan A, Karamvir, Dong Gyu Kim and Sachin Narwal.