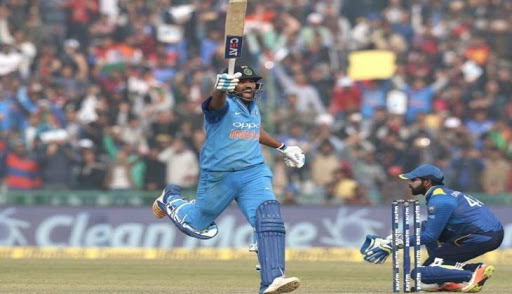 Indian star opener Rohit Sharma reminisced his special knock of 208 runs from 153 balls and it was his third double hundred in ODI also that day was extra special for him as his wife got emotional after he achieved the special feet.

Rohit narrated the incident during his appearance on the 2nd episode of “Open Nets with Mayank”.

As he said his wife thought he had twisted his hand while diving for 196th run during the innings.

Rohit explained the entire incident in detail where he said “As you can see my wife got emotional there, this day was special for me as it was my anniversary. Probably the best gift that I can give it to her on a special day, however, it made me emotional”.

He further added that “When I just came out from the ground. I just asked her(Ritika) that why did she cry? And she thought I twisted my hand at 196th run mark while I was diving to run between the wickets, she got emotional of because of that I guess”.

This match took place at Punjab Cricket Association Mohali where he scored 208 runs with 13 fours and 12 sixes against Sri Lanka.

Due to Rohit’s amazing knock, India posted 392/4 in the allotted fifty overs. When Srilanka came into bat they were not able to chase the target and India won that match by 141 runs.

He talked about the way he paced those runs in that match where he added “To be honest I was going pretty slow. I never thought I will get a double hundred. Once I cross 125, I realize that It is up to me only if I can go out it will because of my batting. As the pressure on the bowler is immense at that stage”.

If IPL would have started on time these three players who are Rohit, Shikhar, and Mayank would have played for Mumbai Indians, Delhi Capitals, and Kings XI Punjab respectively.