Sakshi Singh Dhoni gave a befitting reply to all the haters who want MS Dhoni to retire from cricket as it seems very strange to know that people forget very easily about all the achievements that this man has brought for the country as a captain. 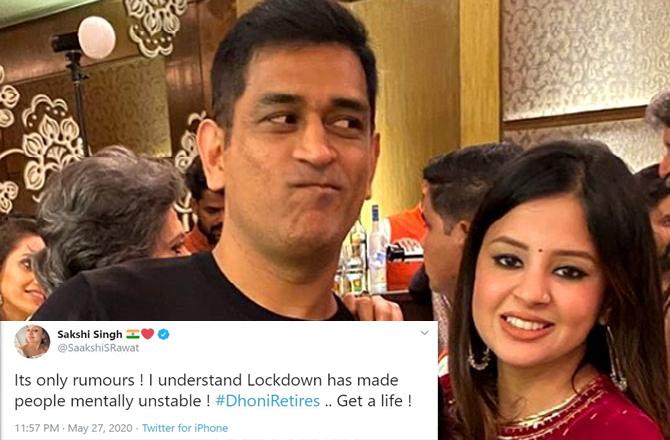 The reason Sakshi put a statement on her Twitter handle in reply to  #DhoniRetires became one of the top trends on Wednesday, prompted her to clarify this about Ms Dhoni Retirement as she said “It’s only rumoured. I understand Lockdown has made people mentally unstable. #DhoniRetires.. Get a life.” on her twitter account and that tweet was liked by the Chennai Super Kings franchise twitter handle.

Later Sakshi deleted the tweet that stirred the social media. There has been little or no clarity over the future of former Indian skippers after the 2019 World Cup. The Ranchi born wicket-keeper -batsman last played against New Zealand in the semifinal of 2019 world cup after that he has not made himself available for the selection and also no clarity has come from MS Dhoni whether he will be playing for the country again or not.

As Dhoni also lost his central contract with BCCI people started making speculations that Indian Stalwarts will not play again but till the time we don’t hear anything from Dhoni we cannot jump to any conclusion. With the IPL 2020 suspended in the wake of the Coronavirus pandemic, fans aren’t sure as to when or how soon Dhoni will be back on the cricket pitch.

He further expressed “As far as I know him, he doesn’t want to wear the blue jersey again. He decided that India’s last match in the World Cup was his last. A few people have also told me that this is the case,”

As opinion will keep on coming that whether Dhoni should make comeback in the team or he has achieved enough for the country and he should retire now we need to wait and watch until and unless we don’t hear anything from the legend we cannot make the judgment on this matter.