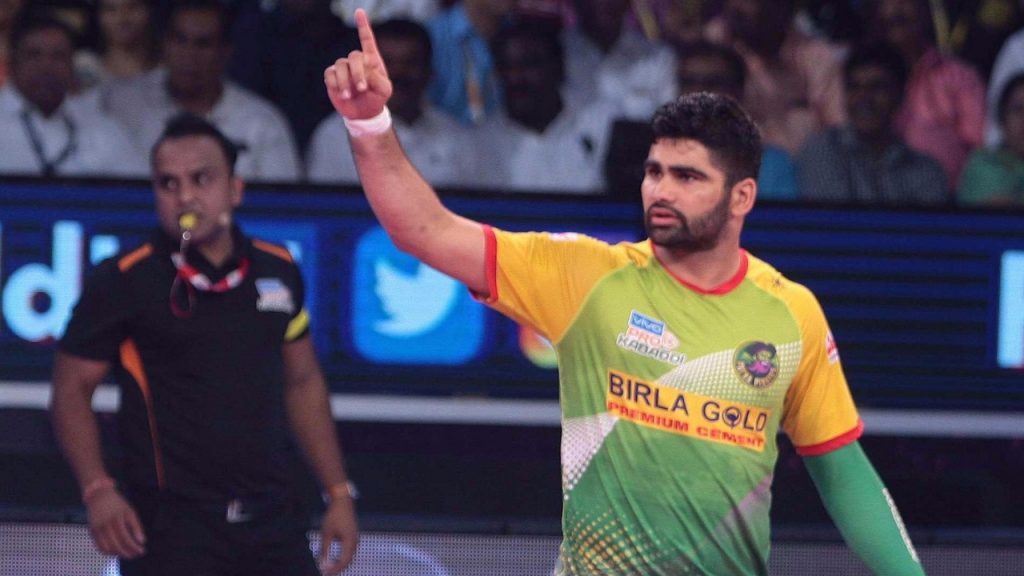 Patna Pirates’ star raider, who is commonly referred to as the “Dubki King”, Pardeep Narwal created history as he became the first player to reach 900 Raid points in the Pro Kabaddi League history.

The star raider reached the feat in his 91st match, playing against the Haryana Steelers at the Patliputra Indoor Stadium. It was his 9th Raid point on the night that helped him reach the magical number of 900.

Pardeep Narwal was sitting on 859 Raid points before the start of Pro Kabaddi 2019 and though he started slow, he slowly got into his own, creating a mark for himself. Points started to come about in the Patna leg of the league, which is the third leg after Hyderabad and Mumbai.

Pardeep Narwal didn’t stop there and went on to register a Super 10 for himself despite spending a little over 14 minutes off the mat. He went on to score 14 Raid points in the game, where he attempted 22 raids.

None of the other players stood-up as the second-best scorer in the side was Hadi Oshtorak with 2 tackle points in the game.

Patna Pirates thereby, lost their third game on the trot at home as they went down 26-35 at the hands of Haryana Steelers.

Patna Pirates now have now lost 4 of their 6 games and stand 8th in the table, with 11 points from 6 matches. Pardeep Narwal, on the other hand, has picked on and scored 47 raid points in Pro Kabaddi 2019 thus far.