Gujarat Fortunegiants Team 2019: Gujarat Fortune Giants is a kabaddi franchise representing Gujarat that has been the part of the Pro Kabaddi League since 2017. The team is currently captained by Sunil Kumar Malik and coached by Manpreet Singh and plays all their local matches at the Arena by TransStadia. The team reached two back to back finals in 2017 and 2018, but on both the occasions, failed to lift the title, ending as runner up against Patna Pirates and Bengaluru Bulls respectively. The team is owned by Adani Wilmar Ltd.

Season 5 was nothing less than a dream run for Gujarat Fortune Giants as in the very first season, despite all odds, they reached the finals of Season 5, but lost to Patna Pirates and ended as runner up.
The team played a total of 22 matches, won 15 and lost 4 matches, 3 matches resulted in a draw and ended up with 87 points in the points table.
Top Raider– Sachin (132 raid points in 24 matches)
Top Defender– Abozar Mighani (63 tackle points in 24 matches)

Season 6 was yet another spectacular season for Gujarat Fortune Giants as they reached the finals for the second time in succession, but again lost to Bengaluru Bulls and ended up as runner up.
The team played a total of 22 matches, won 17 matches and lost 3, 2 matches resulted in a draw and the franchise ended with 93 points in the points table.
Top Raider– Sachin ( 159 raid points in 23 matches)
Top Defender– Parvesh Bhainswal ( 82 tackle points in 25 matches) 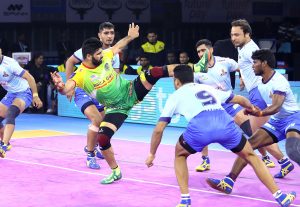 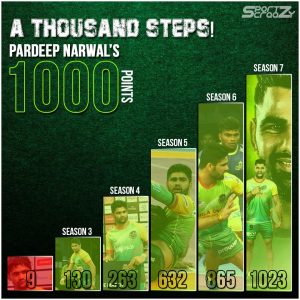 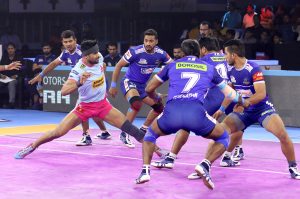 Haryana Steelers’ Defence Rise up Late to Earn a Tie despite Hooda’s Superhuman Effort
Join us: