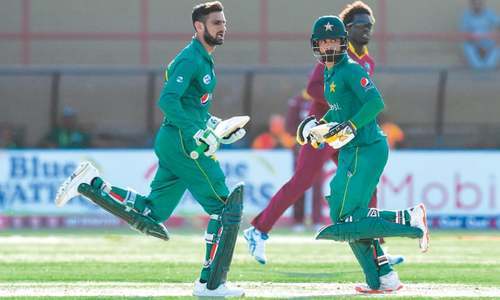 Pakistan clinched a comfortable 2-0 victory against Bangladesh in the T20I series at home. The last game washed out due to rain, but the hosts retained their number one spot in the shortest format of the game with this series victory.

The series turned out into a memorable one for the two most experienced players in the side Mohammad Hafeez and Shoaib Malik, who performed exceptionally well with the bat. It was only a few months ago when both of the players were out of the contention for Pakistan’s T20 side. But they have completely turned things around with their performance in this series.

Shoaib Malik played a match-winning knock of 58 in the first T20I while Mohammad Hafeez was the pick of the batsman in the second ODI after scoring an unbeaten 67 in 49 deliveries.

Meanwhile, the winning captain Babar Azam also had words full of praise for the experienced duo and said that he was impressed with their performances.

“Today the wicket was good and the ball was coming onto the bat. They bowled well so I give credit to Hafeez Bhai for playing outstanding innings,” Babar said.

Pakistan won by the first T20I by 5 wickets after restricting the visitors to only 141 runs. Shoaib’s 45-ball 58 was the highlight of the game. In the second T20I, the hosts put even better performance as they restricted them to only 131 runs courtesy of a great bowling display. In the end, it was all too easy to chase down the total. Skipper Babar Azam (66*) and Hafeez (67*) took the side over the line.