JAI vs BEN Dream11 Prediction: Match 103 of the Vivo Pro Kabaddi league will be the game between the home team Jaipur Pink Panthers and Bengal Warriors. This is their second clash of the  season and their first clash in Mumbai leg ended in Jaipur Pink Panther’s favor in a very close contest as the final score card was 27:25.

Jaipur Pink Panthers: Playing their first match of the their home leg, Jaipur Pink Panthers were close to ending their losing streak this season. A brilliant tackle by the visitors’ defence in the last raid of the match denied the home side a victory as the two shared the spoils. Jaipur Pink Panthers, though, will take a lot of positives from the result, especially the performance of their defence that finished with their season-high of 20 points. New inclusion in the playing seven Vishal scored 9 Points in the match followed by the skipper Deepak Niwas Hooda and Nitin Rawal scoring 4 Points each in the match. Sushil Gulia has been performing well since being drafted into the starting seven and coach Srinivas Reddy will be hopeful that the youngster’s performance last night was nothing more than a rare blip and he will be back among the points against Bengal Warriors.

Bengal Warriors: Bengal Warriors are placed in the second position in the points table, Bengal Warriors cruised to victory in their last match against the in form Haryana Steelers with a final score card of 48:36. Having won four back to back matches in their last five games. The star of the show was, yet again, skipper Maninder Singh, who put up 18 points on the scoreboard in just 19 raid attempts. Raider K. Prapanjan, too, had a strong night and finished with seven raid points. Defensively, Right Corner Baldev Singh led the way with six tackle points and was ably supported by Rinku Narwal and Jeeva Kumar, who together contributed five tackle points. With that win, Bengal Warriors opened a nine-point lead over third-placed Haryana Steelers and are looking in prime position to finish in the top two and book their berth in the semi-finals. With both their defense and forward playing in sync, they look to have good chances of beating the home team Jaipur Pink Panthers in today’s match.

JAI vs BEN Broadcast Details: The Kabaddi match between Jaipur Pink Panthers and Bengwal warriors will be telecasted across the Star Sports Network in multiple languages. Live Score updates and live stream will be available on Hotstar.

1.Deepak Niwas Hooda – The skipper is currently the top scorer of his side in this season. Of late, Deepak hasn’t been in the best of form has performed well in the last few matches. He has scored 124 points in 17 matches this season and has managed to score 5 Super 10s.

2.Sandeep Dhull – The inventive defender leads the defensive department of the team. He tends to soak in the pressure during the course of the game. He has 60 points in 17 games that include 5 High 5s too.

Bengal Warriors:
Maninder Singh – The captain has been in a resplendent form who has been a key raider for his side. He snatches the game away from the opposition. He has 156 points in 17 matches. He is in an amazing form as he has scored 7 Super 10s this season.
K Prapanjan – The relentless raider and also the second most top raider for the side, K Prapanjan is a game-changing raider for his side as he has scored 96 points in 17 matches and is one of the mains of the raiding department. 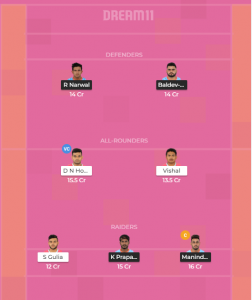