DEL vs PUN Dream11 Prediction: Match 113 of the Vivo Pro Kabaddi will be played between Dabang Delhi and Puneri Paltan in the Chandigarh leg of the tournament. Their last clash took place in the Ahmedabad leg where Dabang Delhi beat the Pune side with a score difference of 2 Points with the final score card of the match read 32:30.

Dabang Delhi K.C- The table toppers Dabang Delhi are well aheadin of the other teams in the points table. Having already qualified for the play offs, Dabang Delhi have proved what they are truly capable of. They were impeccable in their last game too that they played against Patna Pirates as they beat them with a formidable score card of 43:39. It was raider Vijay’s day who was the top scorer of the match with 13 points against the Patna side. Youngster and star raider Naveen Kumar too scored 11 points in the match. Chandran Ranjit who lookeed a bit off-touch, scoring 8 points in  the match. Among the defenders Anil Kumar was the top scorer of the side. They will be playing their first match of the Chandigarh leg today that will be against Puneri Paltan.

Puneri Paltan- Puneri Paltan have had a below average season this year. They have managed to win just win six matches in total of 19 matches they have played. They still have a little chance of qualifying for the play offs as they play their first match of the Chandigarh leg today against the table toppers Dabang Delhi. Given that they shouldn’t have any room of mistakes as they battle for a place in the play offs. They will require an all-round team performance to get the better of the league leaders and must defend decisively to stand a chance of winning. The last game that they lost against Jaipur Pink Panthers, Pankaj Mohite scored 14 points as he was the top scorer of the side. He got a great support from Manjeet who scored 8 points in the match. In the match against Dabang Delhi today, Pankaj Mohite and Manjeet will be their two primary raiding options and the duo have to deliver for the team, if they are still harbouring hopes of making it beyond the league stage. Nitin Tomar is another name that can have a big say in raiding, if he can find form against Dabang Delhi K.C. In defence, skipper Surjeet Singh will need to lead form the front and will require support from the likes of Balasaheb Jadhav, Girish Ernak and Sagar Krishna to keep Dabang Delhi K.C.’s vibrant raid force at bay.

DEL vs PUN Broadcast Details:
The Kabaddi match between Dabang Delhi K.C and Puneri Paltan will be telecasted across the Star Sports Network in multiple languages. Live Score updates and live stream will be available on Hotstar.

Dabang Delhi K.C
Naveen – He is one of the top-scoring players of the tournament with 218 points and 6 tackle points in 18 matches and  Naveen has the most number (17 Super 10s) of Super 10s within this season so far. This makes him a record holder that is not easy to break.

Chandran Ranjit – He has been the side’s second-highest scorer after Naveen, scoring 92 points including 4 tackle points in 17 games thus far. He has played a crucial role in turning games around on several occasions. His presence makes a significant impact on the side.

1. Pankaj Mohite- The second top scorer of his team after Manjeet, Pankaj has risen up to the various occasions to pull the game towards his teams’ win. He has 113 points in 16 matches so far in this season.

2. Manjeet- The top most raider for his side, he has performed very consistently for his side and that directly reflects on his total points this season. Manjeet has scored 126 points in 19  matches as he remains the key player of the side. 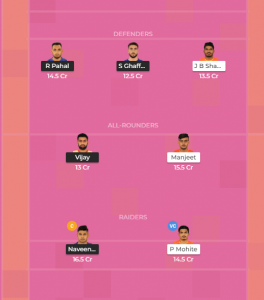