Bengal Warriors: Bengal Warriors have had a fair home leg this season. They have won their last two games and today they will be playing the last game of their home leg. Playing against the Bengaluru Bulls who are now on the winning track, Bengal defenders have a tough task to handle as opponent team’s Pawan Kumar Sehrawat is unstoppable this season. Bengal Warriors beat U Mumba in yesterday’s game where raiders Sukesh Hegde (8 Points) & Maninder Singh (7 Points) helped their team towards the victory. It goes on to see how they are able to fair against the firm Bangalore team.

Bengaluru Bulls: The team is currently having a smooth run as they have won four out of the last five games they have played. Bengaluru Bulls have emerged victorious in the last two close encounters against Patna Pirates and Telugu Titans respectively. In the last game against Telugu Titans, Raider Pawan Sehrawat (23 Points) was the top class performer as he tore apart the defense of Titans. Overall the side looks good and steadily climbing up the points table. Currently placed at fourth position, they have a chance of replacing Haryana Steelers as they lock horns with Bengal Warriors tonight.

BEN vs BLR Match Timing & Match Details: The Kabaddi match between Bengal Warriors and Bengaluru Bulls will be played at Netaji Indoor Stadium, Kolkata on 11th September 2019 at 8:30 PM IST.

BEN vs BLR Broadcast Details: The Kabaddi match between Bengal Warriors and U Mumba will be telecasted across the Star Sports Network in multiple languages. Live Score updates and live stream will be available on Hotstar.

Bengal Warriors
Maninder Singh – The captain has been in a resplendent form who has been a key raider for his side. He snatches the game away from the opposition. He has 121 points in 15. He is in an amazing form as he has scored 5 Super 10s this season.
K Prapanjan – The relentless raider and also the second most top raider for the side, K Prapanjan is a game-changing raider for his side as he has scored 88 points in 14 matches and is one of the mains of the raiding department.

Bengaluru Bulls
Pawan Sehrawat – One of the most dangerous and consistent players of this season, Pawan holds the top position in the most number of points in this season i.e., 197 points in 15 games. He has scored 9 Super 10s this season and his contribution in the defense too can’t go unnoticed as he has scored
Rohit Kumar – The skipper of the side has been having a good run of his form this season. He provides the best support to his raider Pawan during the game. Rohit has seen his form returning back as he had a couple of good games in his previous matches. So far, Rohit has 76 points in 15 matches and he is one of the key players of his side. 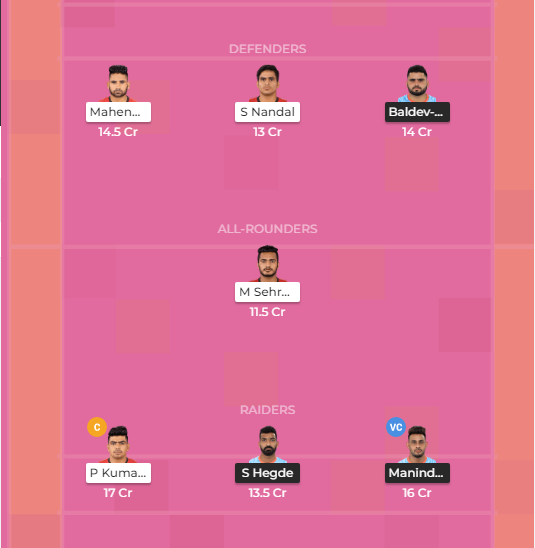 Catch all the live updates of BEN vs BLR Kabaddi Match, including live scores and match report. This time BEN vs BLR Dream11 Prediction will depend on the final team line-ups.