Coming from one of the backward villages of Punjab, the rower struggled throughout his way until he reaches on the top of his game. His notable performances have been at the major international events like Commonwealth Games & Olympics, marking his village, Dalelwal of Punjab, on the world map. From a time when he did not even know the correct pronunciation of the sport to now when he is at its peak, Sawarn Singh has put a lot of hard work throughout his sporting career.

Sawarn Singh was born on 20 February 1990 in Dalelwala Mansa, Punjab, India. He was born to Gurmukh Singh and Kulwinder Kaur. His father is a farmer & tills 8 acres of land in their village. Sawarn started rowing at a tender age of 18. As a kid, Sawarn wanted to play for India but little did he knew that one day he would reach such a great height. He tried his hands on rowing at the age of 18 & Bajrang Lal Takhar has always been his idol. Apart from Bajrang, runner Fauja Singh was there in his mind as an inspirational force.

In 2008, Sawarn joined the Indian Army through a recruitment rally in Raipur, Chattisgarh. He joined the Indian Army to help his family. At that point, he was completely clueless about rowing. Sawarn knew swimming as he learned it in the village ponds. Later he was selected in the 10 Sikh regiment rowing team. In 2012, he competed at the Olympics & earned the bronze medal at the Asian Games in 2014. His achievements made his villagers realise the importance of rowing. Earlier, nobody in his village knew that race of boat is a professional sporting event.

In 2009, started his rowing journey on a serious note & in 2011 he was titled as India’s best rower when he clinched a gold medal at the National Games. 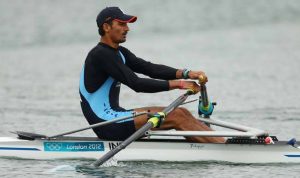 In 2011, Sawarn Singh earned a bronze medal at the Asian Rowing Championships. In 2012, he successfully qualified for the Summer Olympics in the Men’s Single scull discipline & reached in the 16th position with a clock time of 7:00.49 in the first repechage.  The 21-year-old Indian rower secured his place in the London Olympics by acquiring a victory in his specialized event at the FISA Olympic Continental Qualification Regatta for Asia held at Chung Ju, Korea. In 2013, he won at the 2013 Asian Championships and also earned a bronze medal at the Asian Games in 2014. In 2018, Sawarn earned a gold medal at the Asian Games in the Men’s Quadruple Sculls.

Apart from his glorious performances and achievements, the Indian rower has never been a part of any controversy.

NET WORTH OF SAWARN SINGH

The primary net worth and income of Sawarn Singh comes from his service in the Indian Army & also his sporting profession.