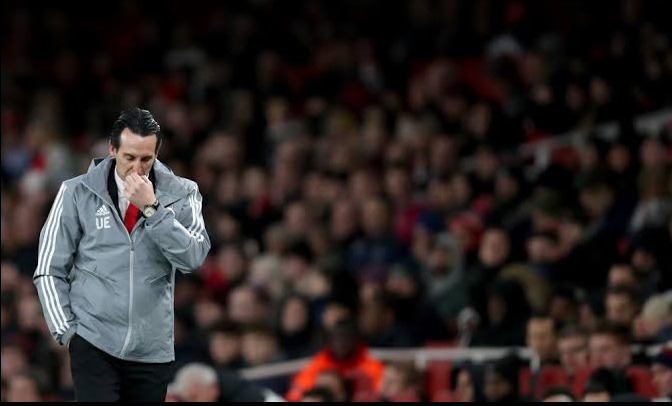 The Gunners defeat at home by Eintracht Frankurt last evening (Thursday) set many Arsenal fans on fire, demanding to sack Xhaka and Emery.

After 90 minutes of on-field efforts from the Gunners to save their place in the knockout stages. The Gunners lost out 2-1 against the Bundesliga side at the Emirates Stadium.

The loss not only fuels the existing frustration among the Arsenal supporters but also, solidify the current manager Emery exit from the club.

Apart from manger the Swiss international player Xhaka made headlines who was making his first appearance after the angry incident that took between him and the Arsenal fans after he was substituted in the 2-2 draw with Crystal Palace last month when he gestured towards fans and took off his shirt before storming down the tunnel.

The wrong gesture of his towards the fans and the club led to him being stripped of the captaincy and sent to exile for the first few weeks.

His return was much applauded by the Gunners fans but in the immediate aftermath of the game, Xhaka was seen smiling and talking with his former mate David Abraham whom he used to play when he was with FC Basel.

The exchange between two players who used to line up together was tagged innocuous by the Arsenal fans, following which the fans surrounded the Swiss international player once again.

Granit Xhaka laughing and smiling after we’ve lost 2-1 in an absolute shambles of a game. I’ve said it once and I’ll say it a thousand more times. Granit Xhaka get out of my club!!!!!!! pic.twitter.com/Fy3wyq7ek4

The Xhaka agenda is real… https://t.co/R0ZottVJGc

Shouldn’t be involved with the first team