MAL vs QAT Dream11 Prediction: Malaysia and Qatar are geared up to face each other in the ninth match of the ICC Men’s T20 World Cup Qualifier, Asia Region final, at the Indian Association Ground, Singapore on July 27, 2019. Both the teams have played 3 games thus far in the qualifiers, and have a similar journey, losing 2 of the 3 games.

While Malaysia’s only win came against Kuwait, Qatar beat Nepal by 4 wickets to earn first points of the qualifiers.

MAL vs QAT Pitch Report: The Indian Association Ground has already hosted seven matches and has turned out to be a rather low scoring grounds, with the exception of Kuwait vs Qatar, and Singapore vs Qatar, which might mean this could be another run feast.

MAL vs QAT Match Timing and Match Details: The cricket match between Malaysia and Singapore will start at 11:30 AM IST, on 27th July 2019, and will be played at the Indian Association Ground, Singapore.

MAL vs QAT Broadcast Details: The ICC Men’s T20 World Cup Qualifier, Asia Region cricket match between Malaysia and Qatar will not be telecasted in India. However, live score updates and live streaming is available on Youtube.

MAL vs QAT Head to Head: No data available

Malaysia Top Players
Syed Aziz – The batting all-rounder has earned the reputation of dancing down the wicket and striking the ball out of the park. His astonishing strike rate of 141.1 and 3 half-centuries in the last 6 innings speak volumes about his abilities. He also has a knack of picking crucial wickets, which makes him a valuable asset for the team.
Muhamad Syahadat – The batter bats lower down, but has the ability to score quick fiery runs. Above all, he has picked crucial wickets at important junctures in the game and also builds pressure by choking runs for the opposition.

Qatar Top Players
Muhammad Tanveer – Tanveer is a good, hard-hitting batsman and has a high strike rate of above 150. He is a vital player for Qatar in the middle order.
Faisal Javed – Faisal Javed is the opener for Qatar and has provided good starts to the team, especially in the powerplay, where he tends to score fast. His strike rate is good and he used his power against Singapore, but unfortunately, couldn’t convert a start into a big score. He would be looking to make amends in this all-important game. 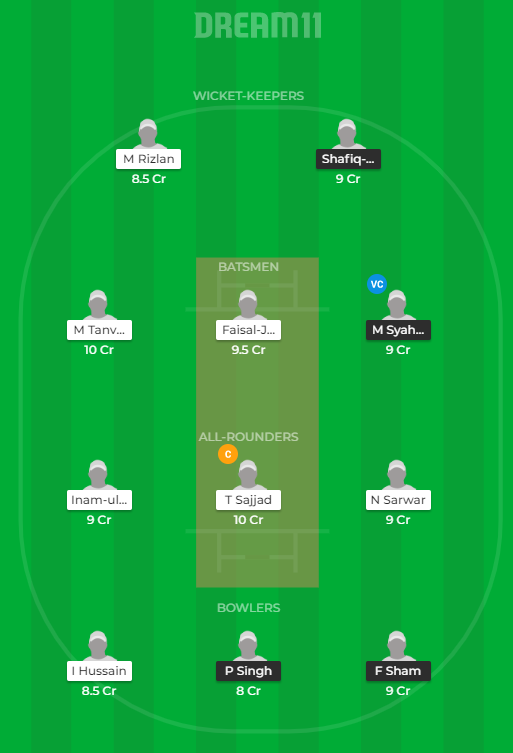 Catch all the live updates of MAL vs QAT Cricket Match, including live scores and match report. This time MAL vs QAT Dream11 Prediction will depend on the final team line-ups.