DUR vs NMG Dream11 Prediction: Durham Heat will be taking on Nelson Mandela Bay Giants in the 20th game of the Mzansi Super League. They got their first victory this season in the last game after being victim of rain in three matches. Durham are sitting on 5 with 10 points in their bag and just below Cape Town, who played one match more than them. On the other hand, Nelson Mandela Bay Giants is second at the table with same points as the table-toppers Paarl Rocks. It will be a very important encounter for both the sides and a victory from either side may bring a big change in the points table.

Dane Vilas, the Durham Heat skipper finally produced a sensational knock as he smashed an unbeaten 75 off just 52 balls to take side over the line in the last game. With confidence all boosted up, Vilas now looks a serious threat for the opposition in the next game.

Wihan Lubbe has been going really up and down this season. After scoring 83 against Blitz, he was out for duck in two consecutive games. But he finally got back to his best as he played a match-winning knock of 49 from 28 balls along with the slipper to guide Durham to victory. A consistent Lubbe can be a massive threat in the upcoming games.

Imran Tahir looks unstoppable at the moment with the ball and delivered another amazing performance against Paarl Rocks in the last game. With bowling figures of 2/19 in four overs, Tahir was once again the best bowler for the Giants. He has already picked up 9 wickets this season and remains as a candidate to become player of the tournament.

Ben Dunk, the wicket-keeper batsman is slowly getting back to his best. He was the lone fighter in the last game for the Giants as he played a  steady knock of 45 to somehow keep them in the game for some time. 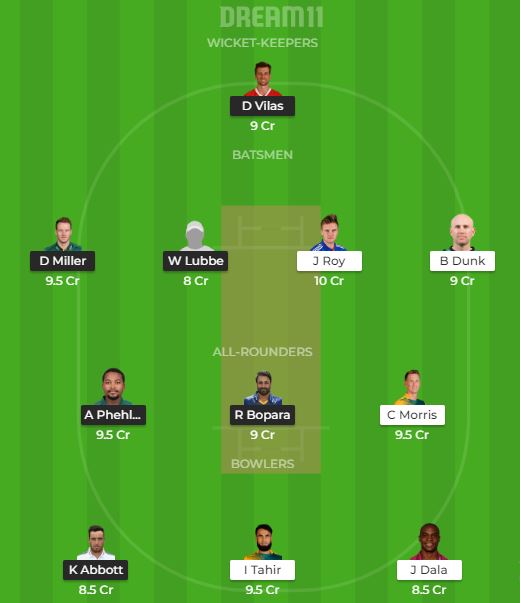