In August, the announcement was made of the Saints touring India to conduct Coach Education workshops in New Delhi, Bangalore, and Mumbai.

November 20, Thane: The English Premier League Club, Southampton FC announced its partnership with Thane City FC a year ago. After which followed multiple streamlines of webinars and workshops educating the parents, players, and coaches about ‘The Southampton Way’ to the club located in Thane. Technical Director, Agnelo Fernandes, and Head of Player Development, Sathyanathan Hiriyan also made their first technical visit to Southampton in the mean time. 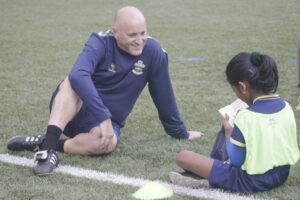 Earlier this year, in August, the announcement was made of the Saints touring India to conduct Coach Education workshops in New Delhi, Bangalore, and Mumbai. Andy Martino, Football Development Manager at Southampton FC, would lead the workshops.

For the past few days, the Saints’ frontman, Andy Martino has been relishing his time in India since his arrival on November 11. Director of Business and Community Development, Mark Abrahams also accompanied Andy when they touch down in Mumbai. The entourage straight away headed to conclude the AIFF E-Certificate course in Palava City in Thane, where Andy was invited as the chief guest on the final day of the course celebrating the Grassroots Festival with nearly 200 participants in form of coaches, players, and parents. 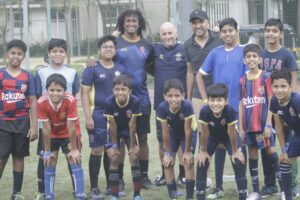 A Coaches Workshop followed the next morning for the coaches of Thane City FC. Later in the evening, The Thane-based club welcomed Andy and Mark with a grand Grassroots Festival held at Gawand Baug. The academy players and their parents were present in numbers to welcome the representatives flying in from the UK. A replica of the same festival on the other day was seen in Lodha Amara, Thane, where Andy once again his presence glorified the event.

The next three days saw Andy touring the tri-cities – New Delhi, Bangalore, and back in Mumbai for the Coach Education Conference. During events, more than 100 coaches got a chance to work and learn under the tutorship of The Southampton Way. Before signing off from India, Andy and the Thane City FC staff attended an ISL fixture at Mumbai Football Arena in Andheri, where Mumbai City FC locked horns with the club from the south, Bengaluru FC.

On his visit to India, Andy Martino said, “This has been an amazing experience for me being in the country here, knowing and getting to interact with all these wonderful individuals. We are proud to have been associated with Thane City FC here in India.”

“The coaches here at Thane City FC are so well behaved and down to earth, their way of treatment to the children, giving them all the attention, it’s very profound. If it’d been my own children, I would definitely trust them with my own children,” added Andy.

Head of player development, TCFC, Mr. Hiriyan who had been with Andy the whole time said, “Andy is such a humble person, amazing guy. He has immense knowledge of the game and since day one he’s been like an open book, ready to listen and share on all he knows about. The learning environment created by him during the course of the workshops has definitely made it easier for all the participants to understand and soak all the knowledge he’s been giving out”

The Southampton FC tour in India is proof that football has come a long way in our country. The sharing of knowledge from the best in business will help create a stronger foundation for the footballing pyramid of the country. 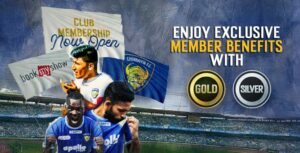 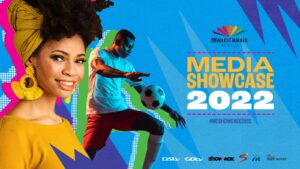 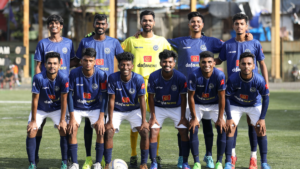 Mumbai Marines FC salvage a point in a 2-2 draw