SAC vs CHI Dream11 Prediction: The NBA 2019-20 regular season basketball match will be an inter-conference contest between the Sacramento Kings of the Western Conference vs Chicago Bulls of the Eastern Conference. Sacramento Kings will be hosting the Chicago Bulls in their home arena as the Bulls will be flying to the west for their road game on Tuesday.

Sacramento suffered three defeats on a four-game road trip on the East but bounced back with a narrow home victory over the Denver Nuggets as the final score of the match was  100-97. Team Forward Harrison Barnes led the side with 30 points (5 rebounds and 1 assist) which were the highest for his side.  Sacramento Kings have not been great this season after being picked by some to make the playoffs this season. The Kings are 8-10 on the season, and the injury to Bagley has hurt them this season. The season will be a test to see if the young players like Bagley and Fox can take the next step up and make Sacramento a playoff team. But after their four road games, the Kings would be relieved to return back to their home. This season, the Kings have the 28th offense in the NBA that averages 104.2 points per game, and they are facing the Bulls’ 16th defense that allows 110.3 points per contest. The Kings are 29th in rebounds with 41.8 and 23rd in assists with 22.7 per game.

Chicago Bulls will be flying to Sacramento for their road game on Tuesday as they get ready to face the Sacramento Kings in the Inter-conference contest. The Bulls have a record of 6-14 and 12th in the Eastern Conference at the moment. Chicago is in the bottom five in points per game and in the bottom ten in rebounds and assists this season. The Chicago Bulls edged the Charlotte Hornets on the road but suffered three consecutive defeats since, including the most recent one to the Portland Trail Blazers.  Zach LaVine led Chicago with 28 points, six rebounds, and five assists. Wendell Carter Jr. added 16 points, nine boards, and two steals, while Lauri Markkanen had 13 points and eight rebounds. Otto Porter Jr. (foot) and Cristiano Felicio (wrist) are out indefinitely, while Chandler Hutchison (shoulder injury) is questionable to face Sacramento. This season, the Bulls have the 25th offense in the NBA that averages 106.1 points per game, and they are facing the Kings’ 11th defense that allows 107.6 points per contest. The Bulls are 22nd in rebounds with 44.1 and 22nd in assists with 23.0 per game.

The basketball match between Sacramento Kings vs Chicago Bulls will be played at the venue Golden 1 Center, Sacramento, California. The Arena can hold around 17,600 spectators.

The basketball match between Sacramento Kings vs Chicago Bulls will start at 8:30 AM IST on December 3, 2019, Tuesday.

The basketball match between Sacramento Kings vs Chicago Bulls will be telecasted in India on the Sony Sports Network. You can also watch it online on the SonyLIV app. Live Score & Streaming will also be available on the NBA official website.

Sacramento Kings: DeAaron Fox will be out until December 20 due to Ankle injury and Marvin Bagley III injured his thumb and he is expected to be out till December 4. While Bogdan Bogdanovic (hamstring) and Trevor Ariza (Groin) have been listed day-to-day by the side.

Chicago Bulls: Cristiano Felicio (wrist) has been sidelined till December 21, Otto Porter Jr. is expected to be out until December 6 and Chandler Hutchison will be out till December 4. While Ryan Arcidiacono is lited day-to-day by the team for this game. 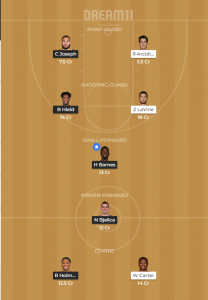