After a rain marred first day pendulum swung for second and third days. Century from Smith and half centuries from Puckovski – Labushagne had put Aussies on top midway into second day. India made a comeback of sorts to take 8 wickets for 128 runs to keep Australia to 338. Rohit-Gill provided a good start to finish day at 93/2 . Australian seamers with decent help from pitch bowled tight lines and bowl out India for 244,with India didnot helping the cause with three run outs. From there on till stumps on day four Australia were in complete ascendency . 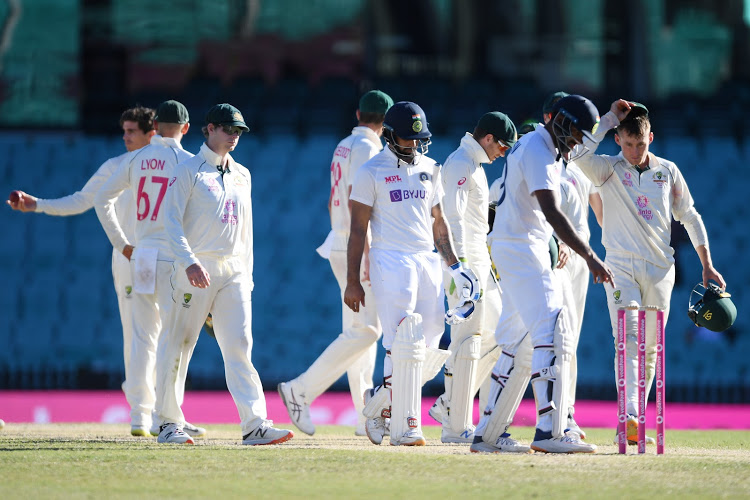 Smuth-Labushagne scored runs again and Paine -Green played aggressively to take the lead last 400 ,setting India a target of 407. India were not helped by injury to Jadeja who had a broken thumb while batting and could not bowl in Australia’s second innings. By close of play on Day 4 India were 2 down and staring at defeat. Day 5 and India needed players to put their hands up and grind out time. India lost Rahane early to Lyon and situation worsened. Pujara was looking solid but he required a player who could play with intent at other end. India made a strategical move of sending Pant ahead of Vihari and it proved a master strike.He along with Pujara shared a partnership of 148 with Pant taking the game to Australia,scored at rapid pace and in his company Pujara’s strike rate improved drastically. Australia missed few chances and Pant took advantage by playing an excellent knock.


He fell three runs short of a deserving hundred of Lyon and Australia might have sensed an opening. Hazzlewood dismissed Pujara and Australia would have now fancied their chances. Vihari injured his hamstring and that prevented him from running. Ashwin joined him at 272/5 and still 44 overs remaining . Victory was out if equation and survival was option even though that required grit,courage and calmness. Australia used short stuff to Ashwin ,he took some blows but weathered the storm.Vihari dead batted every ball that came his way. Overs tickled by and confidence grew in both players both played with a straighter bat ,Ashwin was looking to score here and there but Vihari just defended.

When last over of 131st over was defended by Vihari it was mission accomplished. Team shook hands and Indian contingent was smiling and had every right to. Playing out 131 overs on fourth innings against an attack that is lethal in home conditions deserves everyone’s appreciation ,those also who don’t understand cricket. Australia tried hard but put down three catches which did cost them the game but Indians for their resolve deserved the luck . Rahane still is  undefeated as captain and India head to Brisbane with series still at 1-1. How the last day’s play went draw was a fair result and Indian team should count them as moral winners.