Real Madrid striker, Karim Benzema, who has been instrumental towards the success of the club from last few years has said that he has always thought about receiving Ballon d’OR ‘all the time’.

He recently completed 11 years with the Spanish club and posted a video on his YouTube Channel, where he talked about his future as a football player and answered all fans questions.

When a Fan asked him do you think about clinching Ballon d’or to which he was quick to respond,

“Of course, all the time, since childhood, but it does not mean I’m here like a mad every day.”

However, due to coronavirus pandemic, the award will not be given this year as France Football on July 20th announced the cancellation due to the irregular number of matches and insufficient fair play conditions.

“In exceptional circumstances and exceptional provisions, for the first time in its history, which began in 1956, the Ballon d’Or France Football will not be awarded in 2020, for lack of sufficient fair conditions,” France Football had said in a statement. 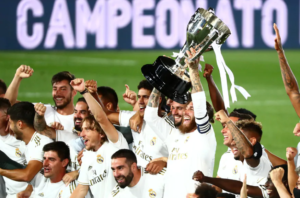 Real Madrid won the recently concluded La Liga 2019-20 and a major credit should be given to their manager Zinedine Zidane, along with star-studded line up which consist big names like Sergio Ramos, Karim Benzema, Gareth Bale and Eden Hazard.

It was 34th La Liga title for the ace club and currently, they are preparing for the Champions League clash against Manchester City, slated to take place on August 8.

The club has the highest fan following on all social platforms and they were the second highest-earning football club with a net worth around $4.2 billion in 2019.