Barcelona will host Alaves in the 18th round match of the La Liga 19/20 season.

Both teams have had mixed fortunes this season, with Barcelona winning 11 and Alaves just 5 so far. Barcelona need to win to maintain the position at the top over bitter rivals Real Madrid; Alaves need to win to not face the prospect of getting relegated this season.

Barcelona has won 11 games out of 17 this season, and are sitting at the top in the table, equal on points with Real Madrid, with whom they played out a dull draw in the El Clasico during this midweek. They have 36 points from 17 matches, with 11 wins and 3 draws. They have lost 3 matches this league season,and have drawn their last 2 encounters, and as such, would be desperate for a winning turnaround.

Alaves has won just five games out of 17 this season, and are sitting at 14th in the table, just 5 points above the relegation zone. They have 19 points from 17 matches, with 5 wins and 4 draws. They have lost almost half their matches (8) this league season,and are win less in 3 and as such, would be desperate for a positive turnaround, with ambitions of a Top 10 finish.

BAR vs ALA Match timings & details

Barcelona will host their rivals in the 18th game week of the season. The game will start at 8:30 PM Indian Standard Time on 21st December 2019. The game will be held at the Camp Nou. The live scores and scoreboard details will be available on the official websites.

BAR vs ALA: Head to Head

BAR vs ALA: Best players

Lionel Messi: Fresh from his record-breaking Ballon d’or title, the Argentinian maverick is one of the best players in world football of all time, arguably the greatest ever, and he would be expecting to tear apart the Alaves defense with his magic feet. He has 14 goals and 6 assists this season in all competitions, and would be look to add to his tally.

Frenkie de Jong: The young midfielder from Ajax has played good football this season, adding steel to the Barca midfield. He has scored 1 goal and provided 2 assists already, and would be expected to make a mark in this match and ensure Barcelona finish top of La Liga by the end of this year.

Aleix Vidal: is a Spanish professional who has played for Barcelona and currently plays for Alavés on loan from Sevilla. Mainly a right-back and a player of great speed, he can also operate as a right winger. He currently has 3 assists to his name this season, and would be looking to add more against his former club.

BAR vs ALA Predicted Dream11 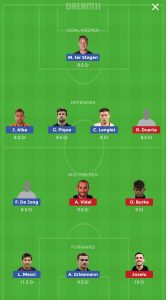